Why there’s no place for silicon implants in facial augmentation

Patients often ask me about facial implants made from silicon. I wrote this post to clarify this to all future patients.

Silicone implants are used in the face for chin augmentation. A pocket needs to be created that is not bigger than the implant itself because otherwise the implant will not stay in place. It is not possible to fixate silicon implants with screws, because the silicone is too soft for it. The silicone would rupture at the position of the screw and the implant would be loose again.

This is also the reason why silicon implants are exclusively used in the face for chin augmentation. This is the only place where acceptable esthetic results are achievable with such an implant. In all other parts of the face the risk is too high that the pocket is not made exactly where the implant should come and then there is no way for the surgeon to correct this. The implant will always go to the lowest point of the pocket.

Another disadvantage of the silicone implant is the unnatural look it mostly gives, if not at the beginning then after a few years when the body of the patient reacts by forming a capsule around the facial implants. The capsule will contract with time and the look becomes more and more unnatural. The unnatural look is the reason why lots of patients have their silicone chin implant removed after a few years. As facial implants, silicone implants are simply not suited.

If you need a chin augmentation it’s therefore advisable to have a sliding genioplasty. This is a procedure routinely done by maxillofacial surgeons. An incision will be made inside the mouth, the chin bone is exposed and with a saw the chin is separated from the jaw. The chin is moved forward over a distance that should be determined before the surgery and fixated with titanium screws and sometimes titanium plates. These plates in fact can stay in place forever, but some patients prefer to have them removed.

If needed some more bone can be taken from the jaw or the side of the chin to fill up the chin fold to give the chin a more natural look. Also that piece of bone needs to be fixated with titanium screws. The chin can also be made longer, shorter, narrower or wider by adding a piece of bone or by shaving the outside. As you see, a sliding genioplasty gives the surgeon a lot of freedom to make a beautiful and natural looking chin with long term very stable results. It is often performed during facial feminization surgery as well. It’s for sure not an easy procedure. You will need to find an experienced surgeon that has a good eye for beauty and the will to do a perfect job. Ask for before and after pictures.

Medpor is a material that can be used as facial implants in several places in the face because it can be fixated with titanium screws. In fact the only alternative without the use of an implant would be lipofilling, which is the transplantation of the patient’s own fat. But for skinny patients Medpor implants can be a good solution. Again it’s not an easy procedure and you will need an experienced surgeon to place them for you. Ask for before and after pictures.

The facial implants of Medpor can be used for augmentation of the cheekbones, the area under the eyes, the nasolabial area (where elderly people often get these lines from the wing of the nose to the corners of the mouth) and the jaw angles. For the reconstruction of the jaw angles it probably is better to have custom made implants, but they can be quite expensive. 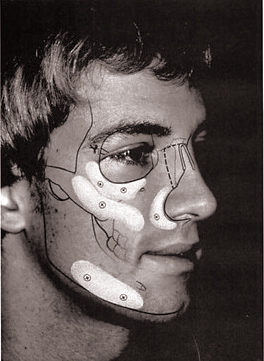 The facial implants in Medpor come in several shapes and sizes and the surgeon can remodel them, make them smaller or bevel the rims to make the rims invisible from the outside.

Facial Medpor implants have an open structure, which promotes native tissue in-growth. This means that the implant stays in the right place and the risk of encapsulation, displacement or infection is very low. That also means after a while, which is at least one year, it will be difficult to remove the implant because it has been kind of incorporated in the face. It starts acting as the patient’s own bone and the only way to reshape it would be by shaving or cutting it, just like normal bone.

The most common complications of facial Medpor implants are malposition and infection.

In case of malposition this will be obvious as soon as the post-operative swelling is gone after let’s say 4 months. It means another surgery will be necessary to remove the screws, reshape the implant if needed and put it back in the correct position. If you’re not happy with the position of your Medpor implants you better have it changed before 1 year has passed.

If the implant gets infected it needs to be removed. This will be very easy because both the implant and the screws will not integrate with the bone because of the infection. Mostly the implants will be removed on both sides to prevent asymmetry. If the patient still wants Medpor implants they can be placed again after a healing time of at least 6 months.

So in the hands of a meticulous and experienced surgeon facial Medpor implants are an excellent way of augmenting the cheekbones, the area under the eyes and the nasolabial area. For augmentation of the jaw angles custom made implants can be made after a CT-scan has been taken.

For chin augmentation a sliding genioplasty is the way to go.

There’s no place for silicon in facial implants.