News flash: Measures have been tightened

Given that the number of corona cases is on the rise again, the Belgian government has decided to tighten safety measures until 25/04 to avoid a third wave.

Please follow the safety restrictions made by the Belgian government while travelling. Apart from that, we have listed our own safety instructions when visiting our clinic: download instructions.

What about travelling abroad and cancelling or postponing surgeries?

Electrolysis hair removal is the only method of hair removal that can claim to have permanent results according to the FDA.  As we all know, electrolysis is a lengthy process, and a certain amount of regrowth is part of that process.

To understand the process of regrowth and the ideal time interval between clearing sessions of electrolysis hair removal we first have to understand the basics of hair growth.

This means 5 on 10 hairs are not visible at the time of the first clearing electrolysis session. So they are not treated as the electrologist can only treat the hair that is visible. This is called “FALSE” regrowth. Let’s say in a 6th hair the shot of the electrologist failed to kill the hair. This is called “TRUE” regrowth.This means you will have a TOTAL “regrowth” of 6 out of 10 hairs after the first session. Only one of them in this example is true “regrowth”.

Hair in the final week of resting appears within one week

In this example hair number 4 is in her final day of resting the day of treatment. This hair will start growing the day after the electrolysis session. It will appear on the surface of the skin within the week. The early anagen hair will even reach the surface in less than a week.

Now let’s have a look what happens with the hair on the other extreme. Hair 1 started resting the day of the shaving. The duration of the resting phase is also not the same at different areas of the face.

The lip hairs are on average 6 weeks in rest, the rest of the beard 10 weeks. Mind you, these are the average so there is variation between person and the other. Also for the same hair the duration of rest and growing.

If hair 1 is a lip hair, she will be in rest for 6 weeks before appearing on the lip. Every lip hair appearing before 6 weeks was not visible so not treated during the 1st clearing session.

If hair 1 is another beard hair, she will be in rest for 10 weeks before appearing on the face. Every hair appearing before 10 weeks on the rest of the face was not treated during the 1st clearing session. 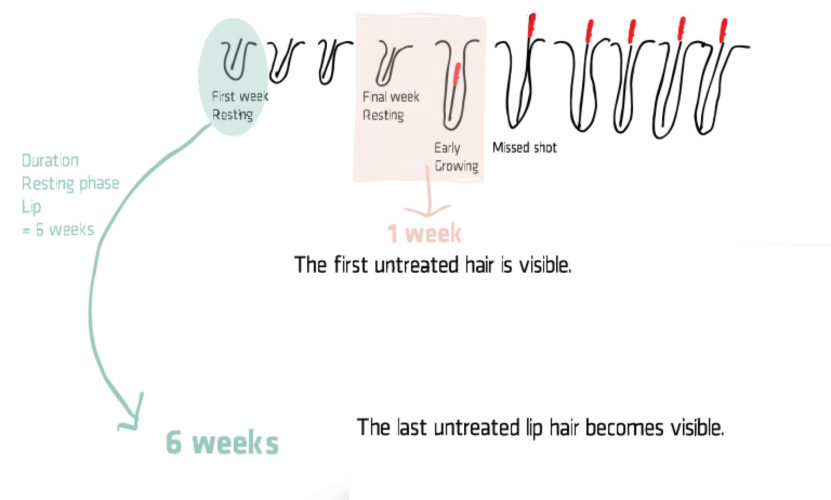 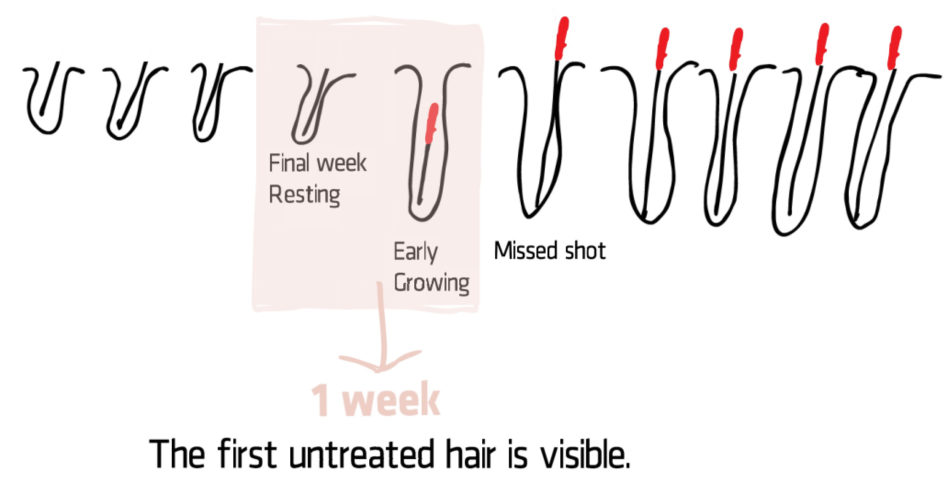 What happens with the electrolysis shot that missed to kill the hair follicle?

The missed shots on the lip will become visible on average 6 weeks after treatment. This means that you will have a little peak of regrowth of hairs on the lip on average 6 weeks after treatment. The missed shots of the rest of the beard will become visible after 10 weeks, with a little peak of regrowth at the same time. 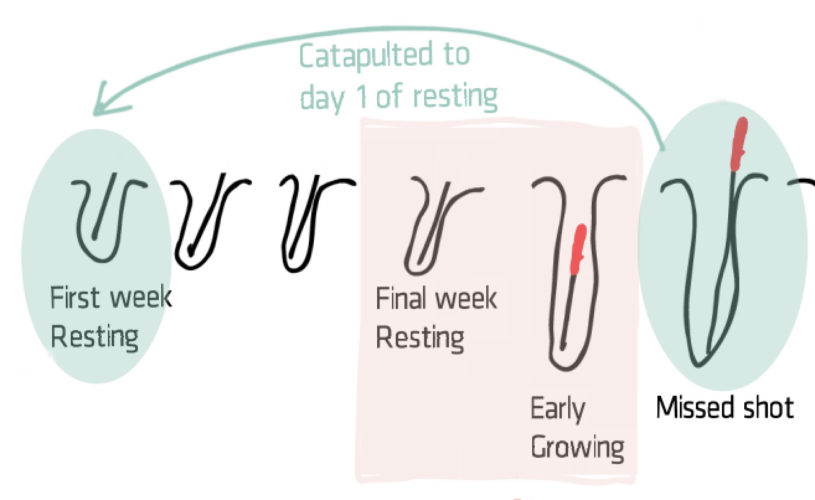 How much regrowth after electrolysis hair removal is normal?

Electrolysis Regrowth can be classified in two main categories:

The endless controversy about regrowth in electrolysis hair removal is largely due to the fact you cannot tell if the hair is true regrowth or, for example, an anagen hair replacing an earlier shed telogen hair. You cannot look at a hair and be certain, because “new growth” hairs and “regrowth” hairs look the same.

There are electrologist that think a hair has to be treated several times before it is permanently destroyed. While there may be some truth to the “breaking down” concept, we don’t believe in it. We believe that you either destroy the follicle, or you don’t. If the follicle is not destroyed, the regrowth ultimately achieves its original size.

There will always be a certain amount of re-growth after initial electrolysis treatments, even when they are performed by a skilled electrologist. Whilst opinions differ as to what is an acceptable percentage, most experienced electrologists estimate that for a treatment to be considered effective, at least 40-50 percent of the hairs should be permanently removed with each treatment.The average killing rate is 50-60 % with 60-75% being roughly the highest level possible. Experts cannot give a definitive figure because there are so many variables which affect outcomes. The electrologist’s skill in working with these variables will determine the percentage of permanency for each individual treatment. Don’t get discourages, just keep attending your appointments regularly. This will ensure you get the most positive results.