A question we often get is if botox can be used to reduce the volume of the jaw muscles. Yes, this is possible though it’s not always the best solution.

In a study done in Seoel, Korea which was published in 2009 (Botulinum Toxin Type A for the Treatment of Hypertrophy of the Masseter Muscle, Nam-Ho Kim, M.D. Ro-Hyuk Park, M.D. Jong-Beum Park, M.D, Plastic and Reconstructive Surgery • June 2010) it was shown that on average a reduction of 25 – 30% is possible after on average 4 injections of 100 – 125 units of Botox per jaw side. That means that on average 950 U of Botox will need to be injected to reach this effect. The first effect of the Botox can be seen after about 6 weeks, with a maximum effect after about 3 months. The average treatment time was around 2 years.

The conclusion was that Botox treatment can be very effective in jaw reduction IF JAW MUSCLE HYPERTROPHY IS THE MAIN CAUSE.

Another possible factor is too much subcutaneous fat and/or too large buccal fat pad. In that case losing weight, having liposuction done and/ or buccal fat pad removed could be a better option.

As we all know in many trans women however there can be considerable jaw flaring caused by prominent jaw bone angles. For them probably the best option is to have surgical jaw reduction together with a surgical reduction of the jaw muscle if indicated. In case of too much subcutaneous fat that cannot be dealt with by weight loss a subcutaneous liposuction could be done and maybe a buccal fat pad removal. 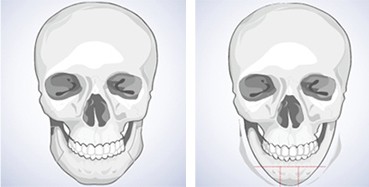 So in conclusion it is very important first to find out what is the reason for the jaw flaring.

If you don’t know what the cause is in your case, best option is to make an appointment with a surgeon experienced in jaw reduction.